“Mapping the Universe and Other Small Things:  The Quest for Story-Based Exploratory Learning.” 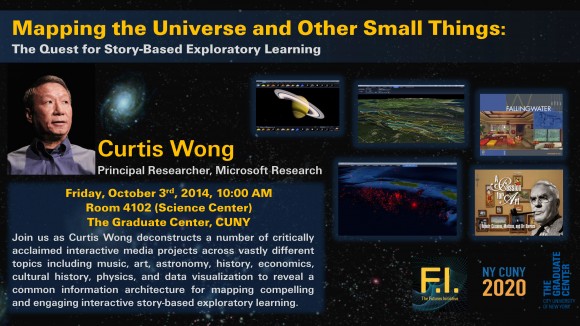 Curtis Wong, Principal Researcher at Microsoft Research, is coming to New York City for his family vacation . . . and he is bringing his laptop (ssssh, please don’t tell his family) . . . and he is going to share with us his history and his reflections as one of the premier data visualization scientists in the world.

I am thrilled, delighted, honored, and moved beyond words.  You will be too if you come out and see this man’s remarkably long, creative,and exciting body of work [his bio is below] and hear him talk about how you can never just “visualize data”: in the process between collecting and visualizing, comes thinking, ethnography, history, politics, and very deep analysis.  And beauty.   Without clarity to communicate and beauty to inspire, why bother? Data visualization is storytelling.   And no one tells a more beautiful, evocative, deep, and inclusive story than Curtis Wong.
—–

Curtis and I spoke a few weeks ago and I know he is excited that I am focusing on public education and starting a New York hub for HASTAC and directing the Futures Initiative which brings his kind of thinking into a program designed to support the next generation of college professors as leaders of institutional and pedagogical transformation.  I also told him that, as part of the CUNY2020 grant we received, we’ll be creating a new Master’s degree.  I have jokingly been calling it the Master’s in Data Interpretation, Visualization, and Analysis (DIVA!!).  Well, it is a little like that.

Curtis Wong’s visit will help us think through more about this new program, too. For a long and distinguished career, he has embodied the melding of science and humanities and beauty and public contribution and public purpose and public use.  His biography is below.   It’s a breathtaking, inspiring career.

And his TED talk is one of my favorites, a demonstration of the World Wide Telescope, a project he led for “crowdsourcing” observations about the cosmos.  Citizen Science.  And, yes, it was beautiful.

If you are in New York on Friday, October 3, give yourself a treat and join us for this wonderful event.

Curtis Wong, Principal Researcher at Microsoft Research, is responsible for basic and applied research in media and interaction. He has been granted more than 50 patents in areas such as data visualization, user interaction, interactive television, media browsing and automated cinematography. He is also co-author of Microsoft’s 5,000th patent in 2006 and 10,000th patent in 2009.
Recently, Curtis has led the effort to enable interactive spatial temporal data visualization as a broad capability for everyone to gain insight into the growing tide of data that is being generated from devices and services. This work, codenamed Project GeoFlow, will be released as part of Excel 2013 as Power Map and is Microsoft’s first geospatial temporal data visualization application for the broad market.

In 2008 Curtis fulfilled a lifelong goal to create the WorldWide Telescope (WWT), which is a free, rich interactive virtual simulation of the visible Universe to enable kids of all ages to explore and understand the Universe. Curtis worked closely with WWT’s Principal Architect and Engineer Jonathan Fay to create WWT’s integrated rich media authoring, animation, and playback engine to allow anyone to produce rich interactive guided tours of the Universe.  WWT guided tours look like HD movies with narration, music, graphics, text, and animation but are fully interactive at any time with embedded links to information sources all over the Web. The tours are created by moving a virtual camera through the rich 3D environment to define paths that are rendered in real time within the rich visual environment from the highest resolution images from ground and space based telescopes. WWT has enabled more than ten million kids of all ages from every continent on Earth to explore the Universe and learn about astronomy from scientists and educators. WWT is installed in the Hayden Planetarium in New York, The Adler Planetarium in Chicago and the California Academy of Sciences in San Francisco and other cities to enable interactive exploration of the Universe by the public. WorldWide Telescope was launched at the TED Conference in 2008 and featured at TEDxCalTech in 2011.

Curtis has spent some of his time working with non-profits to develop examples of next generation educational media such as his collaboration PBS.  He worked with WGBH Frontline to produce The Age of AIDS on the global AIDS pandemic in 2006 and the broadband enhanced documentary Commanding Heights: The Battle for the World Economy, winning a 2002 British Academy Award for Online Learning and nominated for the first interactive TV Emmy. The President of PBS presented Commanding Heights to Congress in 2002 as an example of the future of public broadcasting interactive educational programming on the Web.

Prior to Microsoft in 1998, Curtis was Director of Intel Productions in Silicon Valley where he conceived and developed www.artmuseum.net (no longer available) the first Broadband blockbuster art museum exhibition network on the Web. The site featured faithful 3D recreations of concurrent art exhibitions in major museums, such as American Century Exhibition at the Whitney Museum, Van Gogh’s Van Goghs at The National Gallery of Art in Washington DC, and the Virtual Van Gogh Museum in Amsterdam. Visitors to the virtual museum could see the same guided tour as in the museum and closely examine the works of art with related letters and drawings for context as well as text chat with other visitors, take photos from anywhere in the virtual museum and email them to friends via an electronic post card with an invitation to visit the museum.

Prior to Intel, Curtis was General Manager of Corbis Productions, where he was responsible for the creation of a critically acclaimed series of CD-ROMs including: A Passion for Art, Critical Mass, FDR, and Leonardo da Vinci which collectively won dozens of awards and critical acclaim in the NY Times and the NY Times Book Review. Walt Mossberg’s Personal Technology column in the Wall St Journal’s called A Passion for Art the “greatest CD-ROM of any kind to cross my desk since the multimedia revolution began” and NPR’s All Things Considered featured A Passion for Art which was likely the first and last time a CD-ROM was demonstrated on the radio!

Before Corbis, Curtis was a producer for the Criterion Collection where he created special editions of major feature films on laserdisc winning Video Magazine’s top award for The Last Picture Show and Jason and the Argonauts. He produced other special editions of films on laserdisc including: The Great Escape, Bad Day at Black Rock, Citizen Kane, Goldfinger, and The Devil and Daniel Webster. Curtis was also an interactive producer for the Voyager Company (the other side of Criterion) where he was responsible for the group producing Multimedia Beethoven, Amanda Stories, and Pedro Meyer’s I Photograph to Remember, which were three of the first ten multimedia CD-ROMs for Windows and the first multimedia CD-ROM title from Microsoft in 1991.

Curtis has previously served as a trustee of the Rhode Island School of Design, and advisory boards for Ovation — The Arts Network, PBS Online, the Corporation for Public Broadcasting, the Canadian Film Centre, and the American Film Institute. He is included in Richard Saul Wurman’s book, Who’s Really Who: 1000 Most Creative Individuals in the USA and has been invited to speak about his work at the Aspen Ideas Festival, the TED conference in 1997, 1999, 2008 and TEDx CalTech in 2011. 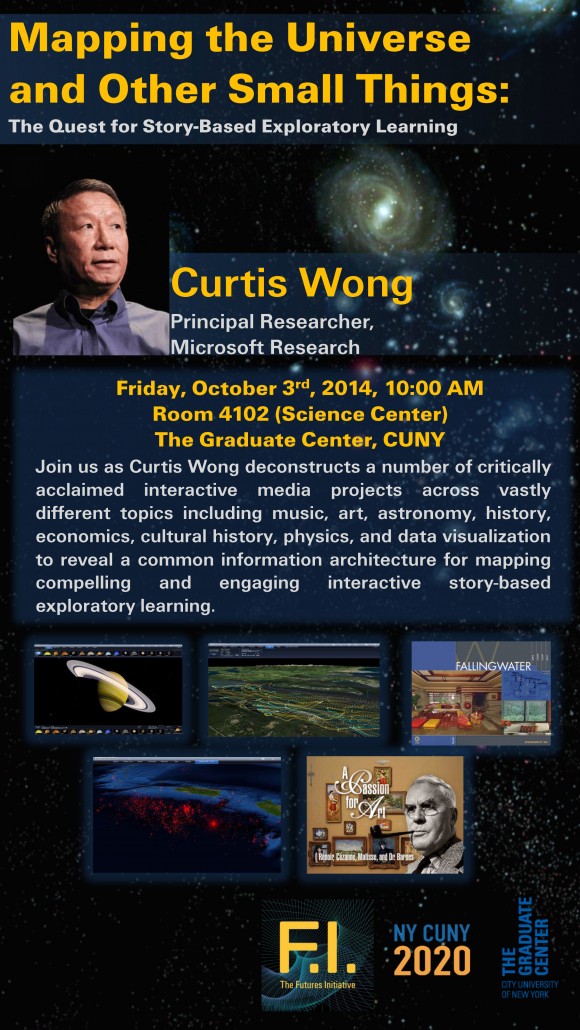 “The classroom remains the most radical site of possibility in the academy” - #bellhooks My reflections on her lega… https://t.co/KY6GrsE8Ey

Such an honor and a joy to write about a figure who has meant so much to me. Rest in power, bell hooks #bellhooks https://t.co/XzM4q5p8vg