By Michael Dorsch on December 4, 2014 in Reflections

On November 21, the Futures Initiative hosted a panel on digital publication and multimedia scholarship. Jessie Daniels was joined by Alexei Taylor and Diana Taylor to discuss their use of various digital publishing platforms in their research collaborations. 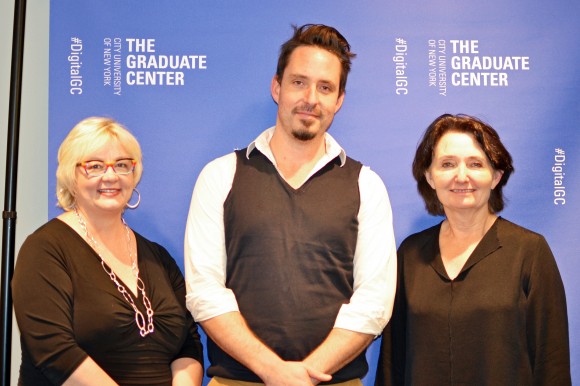 On November 21, the Futures Initiative hosted a panel on digital media platforms for publishing with Jessie Daniels, Alexei Taylor, and Diana Taylor

What is a digital “book”?

Alexei and Diana posed this question at the beginning of the discussion. Diana, who has been working on digital publishing projects for 14 years, said that in the early days scholars were thinking about how to get their tools and research online and about integrating video, photography, and different types of interactive effects. At that time, they were not even calling these kinds of digital collections “books.”

In these early years, rather, it was common that the multimedia and interactive elements of research were compiled into a digital companion project that accompanied a traditional print publication. As the tools that multimedia publishing enabled such as videography and voice recording became more important in the scholarly research process, many scholars began to argue that multimedia was the core foundation of many research projects and thus these types of publishing projects should be made available entirely in digital format to enable more natural pairing and navigation of content from different media sources. Diana stressed that it was important even in these early digital publishing projects that humanists drove the development process for the technology because the technology needed to best respond to the scholarly research goals and needs.

The first digital book project that Diana discussed was Holy Terrors: Latin American Women Perform. Initially the team published the book and then wanted a digital companion so that as performances were discussed in the book, examples could be shown in the digital companion. When Diana and the team compiled the companion, however, they were not satisfied with the way the two content types interacted, so they returned to Duke University Press, the publisher, and asked if both the print content and the multimedia content could be made available online as a complete digital volume. Duke University Press agreed.

Diana said the first digital book project she worked on that was only offered digitally and included no print component was What is Performance Studies? This collection was built on scalar and heavily incorporated a collection of videos. Initial peer-review comments questioned how the collection could be considered a book, but authors wrote about the videos and the written content was integrated with the video media through a system of tagging that connected related topics. The digital nature of the books enables unique kinds of data visualizations, streaming video, and tagging and relating that does not necessarily follow a chronological navigation pathway characteristic of traditional print media. The cost of the project was high at over $45,000 in addition to all of the labor, but it was a relatively new process that became more efficient on later projects. 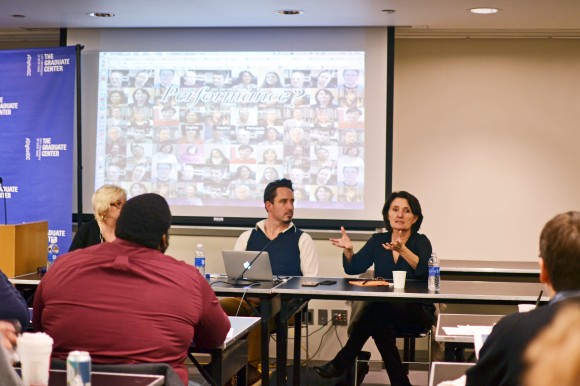 Many of the digital books Alexei and Diana discussed were built on the Scalar platform, which is a content management system similar to WordPress and can help creators build a site or digital book with no or very little knowledge of coding. Scalar was conceived of as one of the first platforms to allow scholars to rethink their research and content and begin to work online. Relationships can be non-linear and pathways can be overlapping. The system of tagging allows for visualization of the tagging pathways as well as for connecting to external archives of content such as museums. Newer developments in Scalar are aiming to reinject the metadata and the material that connects the digital book projects with the archival collections to show how different art or videos are being used. All of this can be tracked and communicated now in metadata.

A feature of digital publishing that is unique is that now scholars are able to use analytics to track how digital books are being used and absorbed by readers. Analytics and track how long a reader stays on a page and even how long they interact with a book overall.

The Six Gestures Hemi.Press project is an example of a linear platform where readers navigate from one chapter to the next just as one would do with a print publication, but the difference is that it incorporates large, immersive videos. In addition, it uses map features that help to situate the reader in a place geographically and even includes 360 images of places. Another feature of the site was the importance of multilinguality.

Alexei explained that one of the things that they have found as they increasingly worked on digital publishing projects of this nature with scholars was that as video became used more, more of the book became video because of the opportunities and immersion that video media provides. Now they have even begun to explore if video could act as the table of contents for a digital book, both drawing in readers and directing them to more in-depth content in the written portions of the book.

Alexei also stressed that as one delves further and further into digital publishing, the skill set needed to produce what you want to use in your work becomes larger—e.g. learning videography, photography, editing, etc.

In many parts of the America’s access to print publications in different languages. The digital books were also multilingual and content was available in native languages as well as Spanish, English, and Portuguese. One of the concerns early on and that is still discussed frequently today is the issue of access to the digital material and who would be able to see the content because many people did not have their own computers or access to the Internet.

Another issues is that English has largely become the lingua franca of the Internet. In many ways this is a reinscription of colonial domination that scholars would like to avoid. Diana said this is why it is crucial to have humanists and humanities scholars involved in the design and implementation of digital works.

Another issue that was discussed is how to preserve these types of digital works especially as technology changes, some platforms become outdated, evolve, or disappear. In some ways many projects are becoming dated by the technology advances very soon after they are released. Alexei explained that on one level it is easy to store and preserve the data. They have files from projects they worked on decades ago that they no longer even have the capacity to play due to changing platforms.

Alexei explained that metadata is the key to preserving this content over time. In 100 years platforms like Scalar and WordPress will likely not be around, but what if you want to access a Scalar book from 2012. If the metadata is properly documented, you get information on file type, authors, tags included, features included, comments made, and connections to external resources, etc. Even if the old platform is not available if all of this information has been preserved, then the work could be adapted to a new platform that can work with the metadata and to reproduce the digital book. A concern now and for the future is to make all content so that it can be migrated to different platforms.

Jessie, Alexei, and Diana also talked about how to use Scalar’s back end and the future of writing technologies and word processing. To learn more about these topics you can check out the video archive of the event which will be made public in the weeks ahead. Stay tuned!

Jessie Daniels is Professor of Public Health, Sociology, and Psychology at the Graduate Center and Hunter College, CUNY. Jessie is the author of two books about race and various forms of media, White Lies (Routledge, 1997) and Cyber Racism (Rowman & Littlefield, 2009). Jessie has a Ph.D. in Sociology from the University of Texas at Austin. She maintains a scholarly blog, RacismReview (with Joe R. Feagin), and she leads JustPublics@365.

Alexei Taylor is Consultant and Creative Director at TypeFold, Inc., a company specializing in born-digital publishing. TypeFold, Inc. develops software to create online scholarly publications and online interactive classroom experiences for higher education courses, as well as to document, stream, and archive events. Alexei also teaches seminars in how to rethink scholarly publishing and what the movement means to the Digital Humanities.

View all posts by Michael Dorsch →

You are invited to the Futures Initiative Welcome Party!
#WeCantBreathe: A Town Hall for the Graduate Center Community on Police Brutality and Murder

Congratulations to our 2022 Dr. Louise Lennihan and Paul C. Notari Grant Winners! Read more about the winners and t… https://t.co/Ltn0ShZUFi